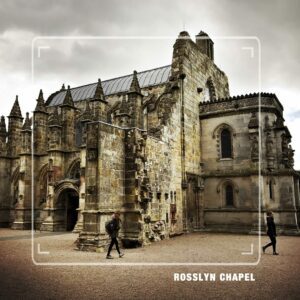 Our Rosslyn Chapel & Melrose Abbey day trip kicks off with Rosslyn Chapel, which remains as enigmatic as when it was built nearly 600 years ago.

As a truly enigmatic wonder of Scotland, Rosslyn Chapel was founded in 1446 by Sir William Sinclair, taking 40 years to complete. The chapel is full of intricate and very significant carvings; however, we’ll get to that later! A little over 100 years after it first opened its doors, the Protestant Reformation swept through Scotland, and the Sinclair family were warned to close the chapel, or risk losing their land and their heads. They complied, and Rosslyn remained shut for over 150 years. At one point during the English Civil War, Oliver Cromwell stabled his horses in the abandoned building!

In 1842, Queen Victoria herself visited the crumbling Rosslyn Chapel, and upon seeing its ruinous state, expressed her desire for the chapel to be restored as part of an effort to “build national pride and identity”. Rosslyn Chapel was therefore painstakingly restored; reopening its doors to worshippers and visitors alike on 22 April 1862.

Now what is truly significant about this chapel is the intricacy of the carvings. There has been for some time a legend that the Holy Grail and other Templar treasures are hidden somewhere inside the chapel. Templar Knights turned Freemasons are believed to have been heavily involved in the construction and design of the chapel, and although this idea was developed in Dan Brown’s “The Da Vinci Code”, the legend only gained notoriety when a group of investigators discovered that the carvings on the ceiling of the chapel detailed musical notes, in a form of stonemasonry sheet music! When these notes are played out on the chapel organ, they form a song; an odd feature to place so discreetly high up on a chapel ceiling don’t you think? 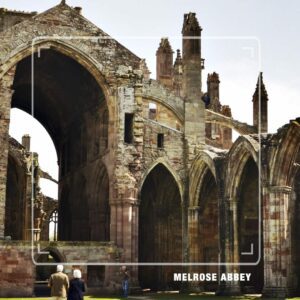 As the first Cistercian abbey in Scotland, Melrose Abbey was completed in 1146. The monks that lived there during the 12th century introduced new and experimental farming techniques to the surrounding land. They began to produce Melrose wool, which became internationally recognised. The famous wool is still produced in the town today, and many of the techniques that the monks implemented remain favourites amongst local weavers. The monks were actually so self-sufficient with their land, that during a time of great famine in the town, itself developing solely due to the success of the abbey, they were able to feed 4,000 people for a period of 3 months.

The abbey is actually the only religious building in all of Scotland to retain its original floor. But it’s what lies underneath that is far more interesting! Many famous people (and parts of people!) are buried at Melrose. It serves as the final resting place for Alexander II of Scotland, the 13th century King who was responsible for drawing up the largely unchanged border between Scotland and England. In 1812, the notable Philosopher and Mathematician Michael Scott’s body was exhumed from a stone coffin, which was discovered beneath the aisle in the abbey’s south chancel. But perhaps the most renowned discovery under the floor of the abbey was the heart, yes just the heart, of legendary Scottish King Robert the Bruce. The conical lead container that holds the heart was first uncovered in March 1921, under the Chapter House floor. When the container was opened, the heart was perfectly preserved in a thick, black liquor. It was rediscovered during excavations in 1996 and then reburied on 22 June 1998.

So whether you’re ready to live like a monk, or just want to appreciate fine examples of medieval Scottish architecture, Melrose Abbey is the perfect stop for you! 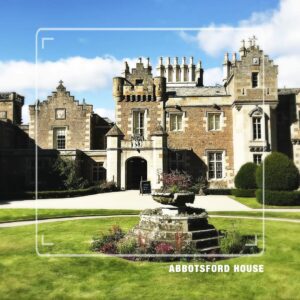 The next stop on our Rosslyn Chapel & Melrose Abbey day trip is the beautiful and extraordinary home of internationally renowned Scottish writer Sir Walter Scott. He bought the estate on the banks of the River Tweed in 1811, when it was largely just an undeveloped farm of 100 acres. The house started as just a small villa, with Scott adding to the structure literally wall by wall, until its completion in 1824. Many of the resources used to transform the villa in the colossal mansion we see today were taken from already ruined castles and abbeys from around Scotland; you can see clear examples of this in the exterior walls of the home, such as the doorway which Walter took from the Old Tolbooth building in Edinburgh. All these features aided Abbotsford in becoming the perfect embodiment of the Scottish Baronial style; appearing almost as if it were a castle in miniature. Look out for the small towers and battlements that excellently decorate the outside of the home. However, Scott was also very conscious to make the building a livable space for him and his growing family; for this reason, he fitted early-stage gas lamps throughout the house, and installed pneumatic bells that connected residents to the servant’s quarters. There’s also an absolutely stunning library, entrance hall and drawing room that attracts visitors from around the world to marvel at their intricate design, lavish Scottish fittings and grand traditional architectural style.

Throughout his financial demise and eventual death, Sir Walter Scott managed to retain Abbotsford House against all the odds, passing it down to his descendants, who remained residents at the house until 2004. His great-great-great-granddaughter and the last holder of the title of Lairdship of Abbotsford, Dame Jean Maxwell-Scott transformed the estate into one of Scotland’s most iconic tourist attractions. It’s a totally unmissable sight to see; hence why it’s a staple on our Rosslyn Chapel & Melrose Abbey day trip!

After whizzing around all day from Abbey to Abbotsford, there’s no better place to finish than the famous Glenkinchie Distillery. Founded nearly 200 years ago by farmers John and George Rate in East Lothian, the distillery lies just 15 miles south-east from Edinburgh; being one of only 6 single malt distilleries in the Lowland region of Scotland. The magic takes place in a beautiful Victorian red-brick factory; a hark back from the days when Glenkinchie had a stint as a sawmill back in 1853!

During our visit, you’ll be able to hear in-depth about the operations of Glenkinchie, and the work behind every drop of the 2.7 million litres for single malt whisky they produce throughout the year – and you’ll even have the opportunity to taste a sample; or two!

We end our adventures with a tour of the beautiful Glenkinchie Distillery; sampling nearly 200 years of history into single malt whisky production.

You may also be interested in our Stirlingshire Day Trip