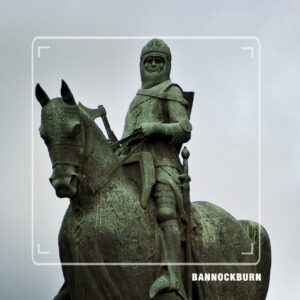 The morning of the 23rd June 1314 was crisp and damp. Sir James Keith, commander of the 600 light Scottish Horsemen, emerges from the darkness of the New Park Forest. Treading carefully across the open ground before him, he soon spots the glistening armour and gleaming weaponry of the 25,000-strong English Army flooding over the horizon. What follows will go down as the most legendary battle to ever take place on Scottish soil. Welcome to the Battle of Bannockburn.
Get ready to experience the conflict first hand as we make our way to the incredible Battle of Bannockburn Experience. Cutting-edge 3D technology will place us shoulder-to-shoulder with Robert the Bruce himself; right in the heart of the action. Encounter the tactics, bloodshed and heroism that changed the course of Scottish history forever.

This first stop is definitely one of our favourites; living history has never been so alive!

Close your eyes and try to imagine the largest, most imposing, most fortified castle possible. Whatever you had pictured in your mind, Stirling Castle is ten times more monumental! The colossal fortress has dominated the landscape of Stirling for over 900 years, and it remains one of the most important castles, both historically and architecturally, in the whole of Scotland.

During its heyday and before Scotland unified with England, Stirling served as the centre of the Royal court. It was where many Scottish Kings and Queens were crowned, including Mary Queen of Scots in 1542, who coincidentally spent much of her life there. But of course, no Scottish fortress would ever be complete without a bloody and macabre history! Stirling Castle has experienced 8 sieges throughout its lifetime, most notably during the Scottish Wars of Independence which dominated the 14th century; however its extremely defensive location resulted in the castle never being fully conquered. Until we arrive of course!

Just before we make our way to our next stop, we’ll take a quick visit to Stirling Bridge; which reigns as one of the best preserved medieval masonry arch bridges in Scotland. Despite this accolade, the centre arch of the bridge was actually intentionally destroyed during the Jacobite Uprising of 1745; in a successful attempt to stall Bonnie Prince Charlie and his advancing forces as they marched south towards the nearby Stirling Castle. However, the bridge has since been fully restored; offering a crossing over the River Forth between the town of Stirling and our next stop!

As Scotland’s largest, most impressive fortification, Stirling Castle served as the centre of the Scottish Royal Court for over 900 years; overlooking the equally impressive Stirling Bridge. 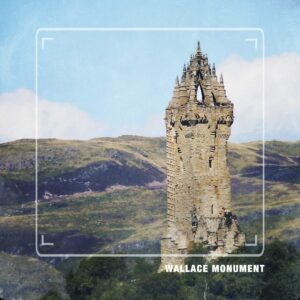 For much of the Dark Ages, Scotland was trapped in the clutches of the tyrannical English King Edward I, who unjustly ruled the country with an iron fist. The Scottish people had had enough, and the two forces collided in 1297 at the immense Battle of Stirling Bridge. The Scottish forces were led to victory by the legendary knight Sir William Wallace; who has since rightly become a national hero of Scotland. And what better way to commemorate the legend than with a colossal monument dedicated to the life and death of a martyr.

The Wallace Monument, which sits high upon the hilltop of Abbey Craig, was completed in 1869 following the instantly recognisable and now iconic design of architect John Thomas Rochead. The Gothic sandstone tower soars 67 metres into the sky; and consists of three main chambers. The first, The Hall of Arms, commemorates William’s life and rise to prominence whilst also displaying his legendary sword; the second, The Hall of Heroes, recognises 30 men and women of national importance to Scotland; and the third, The Royal Chamber, provides an insight into how the Battle of Stirling Bridge was fought and won. The tower is topped by a magnificent crown, which offers breathtaking 360° views across Scotland’s historic heartland; all of which is accessible via a 246 step spiral staircase!

Join us as we rediscover the life and times of Sir William Wallace; Scotland’s greatest warrior!

This incredible 67 metre high monument remembers the life of the legendary knight Sir William Wallace, and the battle of Stirling Bridge he led to victory. 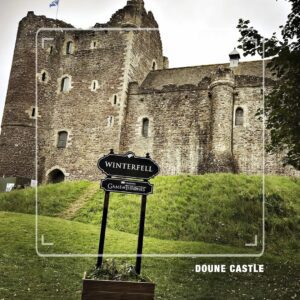 Although technically no longer a cathedral due to the absence of Bishops from the Church of Scotland, Dunblane Cathedral remains a wonderfully enchanting relic of medieval religious celebration. Unlike most churches and cathedrals, Dunblane actually began its life as just a bell tower. The red sandstone tower was originally built around the 11th century, with the rest of the building rising up around it 200 years later. But again in the 15th century, the tower was increased in height by another two storeys; the later addition clearly evident in the visible change of stone and style. And just when the scaffolding was removed, and the cathedral finally looked picture-perfect, the roof collapsed! Dunblane Cathedral remained in this unfortunate state for nearly 300 years, until 1889 when Robert Rowand Anderson, the architect responsible for the Scottish National Portrait Gallery, oversaw its restoration.

As we enter through the ornate western entrance, it’ll very quickly become evident what having no roof for 300 years does to a building, as the walls of the nave are clearly weathered. Interestingly however, the choir stalls have miraculously survived since the 1400’s, and are some of the finest of their type in all of Scotland. All these magical elements add perfectly to Dunblane’s enchanting and enduring aura; a one of a kind cathedral!

As one of Scotland’s few surviving medieval churches, Dunblane’s unique design and enchanting story makes this a stop not to be missed!

Located on the fringe of the beautiful Scottish Highlands, Doune Castle offers the hungry traveller the chance to walk in the footsteps of Scottish Kings; both legendary and fictional!

Originally serving as the home of the Duke of Albany, otherwise known as “Scotland’s uncrowned king” from 1388 until his death some 40 years later; Doune Castle is an extremely rare example of a complete Scottish fortress, remaining practically unchanged from its intended 14th century design, with the layout reflecting one single period of construction rather than additions from various occupants more commonly seen throughout other castles around Scotland.

And we bet you didn’t expect to meet a Hollywood superstar on this tour! Due to its well preserved appearance and idyllic location, Doune Castle has provided a backdrop for many silver screen scenes and television shows, including Ivanhoe, Monty Python’s Holy Grail, and Outlaw King; although it also goes by the name of Castle Leoch (Outlander) and Winterfell (Game of Thrones). And don’t worry, there’ll be plenty of time to recreate your favourite scenes; as long as no one loses their head!

Fortress to film star, palace to prison, ruin to restoration; if only the walls of Doune Castle could speak! 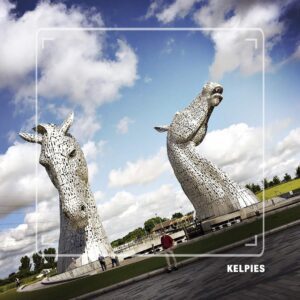 Scotland certainly has no shortage of myths, legends and fairytales to share with the world, but none is more recognised or shrouded in mystery than the enduring tale of the Kelpies. These shape-shifting water spirits are traditionally thought to haunt rivers and streams; usually taking the form of a horse. Although it holds roots in legends of human sacrifice, the story was much more likely created to keep small children away from large bodies of water. Whatever its origins, there’s no better tribute to this ageless story than with two colossal 30 metre high statues; designed by Andy Scott – the same sculptor behind the Beacon of Hope in Belfast.

Completed in October 2013, the 300 tonne structures appropriately tower over the River Carron, near Falkirk in Central Scotland. These two horse head designs are absolutely breathtaking; leaving many of our guests surprised at just how big they are!

These 30-metre-high stainless steel structures gleam in the sun beside the River Carron; just like the shape-shifting spirits they depict!

Rosslyn’s templar treasures, soaring abbeys and stately riverside mansions are all waiting to be discovered; along with a glass of Glenkinchie too!