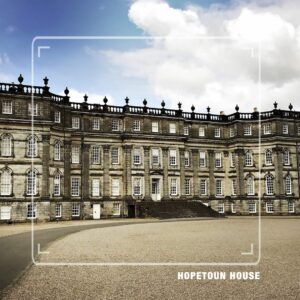 Our first stop on our Outlander tour will take us to South Queensferry, where we’ll explore the magnificent and sprawling mansion of Hopetoun House.
Designed and built by the founder of classical Scottish architecture Sir William Bruce in 1699, the house was greatly expanded by his descendants until it was completed in 1752. Although it is recognised nationally as one of the country’s grandest stately homes, Hopetoun actually found stardom when it was used as one of the filming locations in Outlander, making frequent appearances throughout seasons 1 – 4.
As we wander up the stairs towards the Red Drawing Room, we’ll quickly be able to imagine the Duke of Sandringham pacing through the halls. Or as we travel around to the back of the house, you’d be right to associate the sprawling West Lawn as the area in which the Duke and the McDonald clan fought their perilous dual.The courtyard behind the Stables Tearoom was also transformed into the historic streets of Paris for much of the filming for season 2.

Hopetoun House is the perfect first stop for any Outlander super fan, and luckily, we’ll start as we mean to go on! 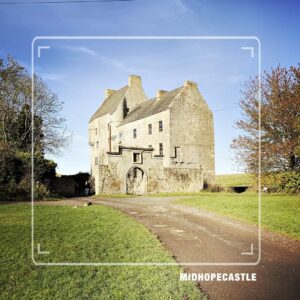 Luckily, we haven’t got too far to travel for our next stop, as Midhope Castle is aptly located on the wider estate of our previous stop; Hopetoun House. Having been built around the middle of the 15th century, Midhope Castle is a fine example of a Scottish tower house; and remains a Grade A listed building today. Although the exterior and the surrounding gardens appear largely intact, the inside of the house is surprisingly in ruin; falling into disrepair at the beginning of the 20th century. However, Midhope underwent substantial restoration work in 1988, which replaced its leaky roof and drafty windows to further preserve the building.

However, if you’re familiar with the shots and scenes of the Outlander series, you’ll probably recognise the castle for serving the external shots of the family home of Jamie Fraser; where it went by the name of Lallybroch. It really is a beautifully historic building, and the view from the bottom of the driveway leading up to the house is truly picture perfect.

So have your cameras at the ready! 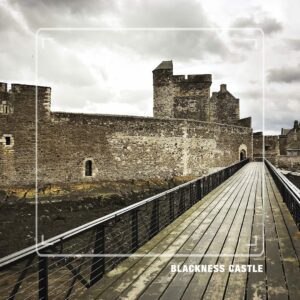 Dominating the shoreline of the Firth of Forth, the 15th century fortress of Blackness Castle was at one point in its long history the most fortified castle in Scotland. Alongside serving as a notorious state prison, famed for incarcerating such prisoners as Cardinal Beaton and the 6th Earl of Angus, Blackness was also the first major residence of the Scottish Monarch; passing into the hands of James II of Scotland in 1453. Other than serving as a military outpost during the First World War, the castle has remained as part of the crown ever since. Due to its unintentionally distinctive design, Blackness Castle has earned the nickname as the “ship that never sailed”, however the location has become much more recognised for its depiction of Fort William in Outlander.Luckily, when we step in the castle’s inner courtyard, we won’t spot Jamie Fraser being notoriously flogged by Captain Randall; although the location was used for that very scene in series 1.

It was also the castle that Jamie broke into in the mid-season finale to save Claire from the clutches of Black Jack; but would you be brave enough to jump into the crashing waves below like he did? 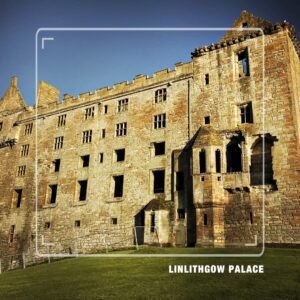 Although it now remains as just a shell of a once very grand and very magnificent structure, the Palace of Linlithgow is by far one of the most notable and protected sites in Scotland. A royal manor has existed on the banks of Linlithgow Loch since around the 12th century, with the location boasting as prime real estate for the Crown; perfectly securing the supply routes between Edinburgh Castle in the east, and Stirling Castle in the west. The historical importance of the palace has continued for centuries; Mary, Queen of Scots ascended to the throne just six days after her birth at Linlithgow in the winter of 1542, in the same birthplace as her father James V in 1512. Many of the 17th century carvings and extensions of the palace were overseen by Master Mason William Wallace; who also notably designed the King’s Lodgings of Edinburgh Castle.To some, it may just appear as a surviving veteran of historic royal living, but to others, especially die-hard Outlander fans like us, Linlithgow isn’t a palace but a prison.

The location was used as the setting for the notorious Wentworth prison. Jamie was imprisoned by the Redcoats here. The torture scenes were filmed in its dungeon, and our heroine was sentenced to hang inside its walls. Linlithgow also stood in for numerous scenes in the new Netflix movie about King Robert de Bruce, Outlaw King.

So naturally, Linlithgow Palace is an absolute must for our Outlander tour, just be sure to not get locked up! 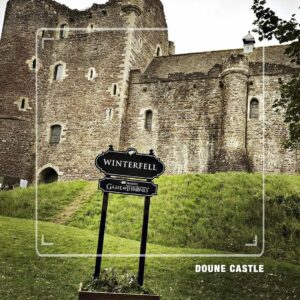 What makes Doune Castle significant above all the other stops on our tour, is that the castle actually remains practically unaltered from when it was originally constructed in the late 14th century by the Duke of Albany, with the courtyard and towering design reflecting thoughts on what a traditional castle should look like; however the project was never completed to its full intended scale. When the Duke’s son lost his head in 1425, Doune Castle was transferred into the hands of the Scottish Monarchy; who transformed the building into a royal hunting lodge. The castle once again changed hands in the later 16th century, when it was sold to the Earls of Moray. Its walls also saw some military action during the Wars of the Three Kingdoms, the Glencairn and the Jacobite rising of the 17th century.

The castle may be one of Scotland’s oldest, but it’s definitely no stranger to the big screen. John Cleese rode an invisible horse around the fortress in Monty Python’s “Holy Grail”, whist Elizabeth Taylor portrayed the damsel in distress in the 1952 smash “Ivanhoe”; all of which were filmed at Doune Castle. It’s now better recognised as the original setting for Winterfell Castle in the Game of Thrones series, and more importantly under the pseudonym of Castle Leoch; the clan home of the Mackenzie’s in Outlander.

The castle may be one of Scotland’s oldest, but it’s definitely no stranger to the big screen 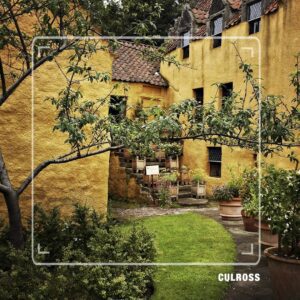 Our next stop will take us down to the winding streets of historic Culross. Due to its location of the banks of the Firth of Forth, the town traditionally served as a bustling port, receiving goods from the farther reaches of Europe, and during the 16th and 17th centuries, Culross was also a major producer of coal; serving as the location for the first mine in the world to tunnel under the sea. For such a historic town, there is certainly no shortage of other-worldly buildings to explore; everything from the magnificent mustard-coloured Culross Palace, to Mercat Cross in the centre of town will be sure to leave your cameras flashing.

For the more eagle-eyed of you, Culross is better recognised as the setting for the fictional town of Cranesmuir in Outlander. The series took full advantage of the breathtaking and protected backdrop for the production of many of its episodes. As we wander across the square, Geillis Duncan’s house will emerge towering on the right. Geillis also met her end at Mercat Cross when she was burnt at the stake for being a witch. It was also in this area that Jamie and Claire rescued the thief, Tammas, when his ear is pinned to the post. Just off the square, we’ll be able to spot the idyllic Little Causeway; the location of Laoghaire’s home in series 4. The interior shots of the home were shot in the nearby Culross Palace, which is also on our itinerary.

So lace up your boots and get ready to step back in time; Culross is certainly not to be missed on any Outlander pilgrimage! 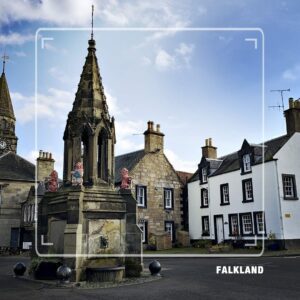 Falkland Palace was the favorite holiday destination of Scottish royalty for centuries, and we know you’re going to fall in love with its intrigue and beauty too! 12th Century hunting lodge turned castle turned royal palace, the design of Falkland is an intelligent take on a combination of Scottish and French Renaissance architecture. Between 1501 and 1541, King James IV and James V transformed the palace, adding additional towers, spires and carvings to its exterior appearance. They also employed famed landscape architect William Barclay to redesign the palace gardens; much of which survives to this day. When James V died at the palace in December 1542, Falkland became a popular retreat for the following Stuart monarchs. Mary, Queen of Scots used to roam around the palace gardens, perhaps practicing falconry, or testing her tennis skills at Britain’s oldest tennis court, which has remained intact since 1539!

The beauty of Falkland village and Palace also enticed those producing Outlander, who featured the town square, the palace and surrounding gardens throughout some episodes. Most notably, the town’s main street and fountain which fills in for 1940’s Inverness and it was inside of the palaces apothecary, where Claire meets Mary Hawkins whilst purchasing medical supplies to attend to the sick Alex Randall.

Just make sure you don’t bump into the ghost of Jamie!